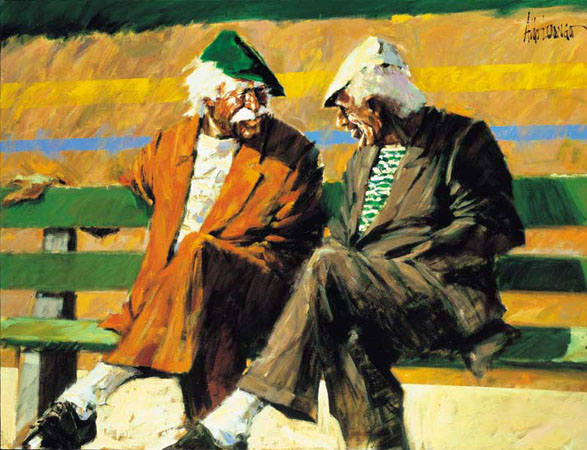 We have a big house. My mother-in-law lives with us. She cooks a lot and does the shopping.

I send her articles on healthily foods and healthy eating – sometimes I print them out because I suspect she’s deleting my emails.

Over time she has developed a number of symptoms – shoulder and back pains, a chronic cough, congestion and difficulty swallowing, snoring, and in general a whole laundry list that I would just lump under “inflammation.” So I give her articles that present research showing the most likely causes related to food.

But she basically ignores most of it and only changes what she buys or cooks under extreme pressure – when I convince my wife that it’s in her mother’s best interest.

But her basic mantra is –  “I know these things might be causing my problems but I’m too old to change and I like my <fill in the blank> and I’m not going to change.”

The Psychology of Change

On way that people have analyzed and resisted change is the “Force Field Analysis” – created to Kurt Lewin, it’s a thought process that we often use unconsciously without even writing it down.

The Force Field Analysis refers to forces in favor of change or that resist or are against change.

Now in this example the forces in favor of change may be perceived as “nice to have” and like an aspiration – “I aspire to be thinner and healthier” – but they may not drive a mindset of change because all of the things on the right seem more ingrained in who I am – my lifestyle that I am comfortable with and don’t want to change.

But then the picture changes… 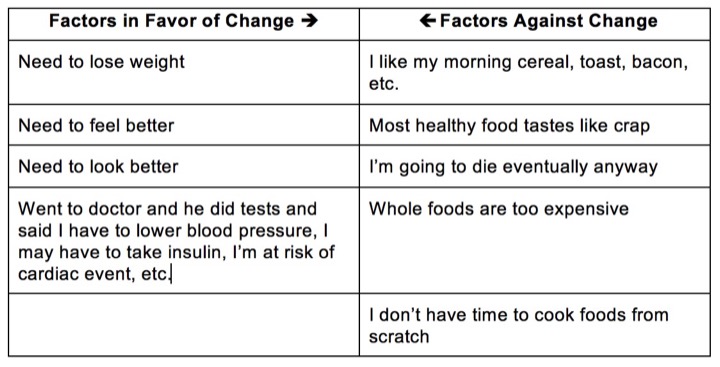 And suddenly a new factor in favor of change surfaces. Why did I have to wait for that to show up? Didn’t I know that was coming?

Some people aren’t willing to make lifestyle changes even faced with this new factor.

Why are Lifestyle Changes So Hard?

Why don’t we weigh things that could happen to us in the future more heavily? Let look at this picture…

Why doesn’t this picture motivate us to change? Why would we consciously chose to experience all of these things on the left when it would only take a few lifestyle changes to prevent it?

And as we get older, a poor diet, dehydration from not drinking enough water, high carbohydrates, and low fat diets all contribute to our “brain fog” as we wind our way closer to actual dementia and Alzheimers because of course close to 1 in 3 people nowadays will find themselves in that arena very soon. So we’re not thinking clearly about the factors on the left. And anyway they seem to big to solve.

What are Lifestyle Changes and Why Call Them That?

So are these “lifestyle” changes? Yes, they are. They’re not just a new diet, but they’re a way of consciously resetting and rethinking everything you do – taking massive action for a very good reason.

For instance, regarding what you eat, you would change almost everything you currently consider to be enjoyable and good. Consider these changes…

Your body was made to last forever. It has cells that regenerate themselves daily, it has an immune system that can heal anything you encounter. With proper care it can even create new brain cells and replace old ones without memory loss. It even has the ability to repair arteries and open them up for proper blood flow.

We have been surrounded by a plant that grows everything that body needs to function optimally for hundreds or even thousands of years.

Everything that has happened to us in the past several hundreds years has led to a shorter lifespan, more illness among adults and children, and a greatly reduced quality of life.

Our medical system has been designed by the drug companies to diagnose and prescribe drugs. When we read about a drug it’s a “lifesaving miracle drug” – why is it we don’t call broccoli a lifesaving miracle food? Because when something is true you don’t have to add the adjectives or shout it out louder.The truth is the truth and needs no explanation or amplification.

And the truth is, you have the power to make simple lifestyle choices that would allow you to do what you were made for – without being a burden to your family and friends, without living in pain for the next 30 years, without losing control of your life to caretakers and doctors.

Werner Erhard said, “The truth is the truth; believed it is a lie.”

In the movie, “The Matrix”, Morpheus brought Neo to see the Oracle and she told him he wasn’t the one even though we became aware later that he was. The Oracle wisely knew that a truth believed wouldn’t work but Neo had to learn and experience the truth and become aware on his own that he was the one.

That’s how we learn everything else.